Cat Sebastian is one of my favorite romance writers, and her latest novel, A Gentleman Never Keeps Score, delivers a sweet yet poignant story. 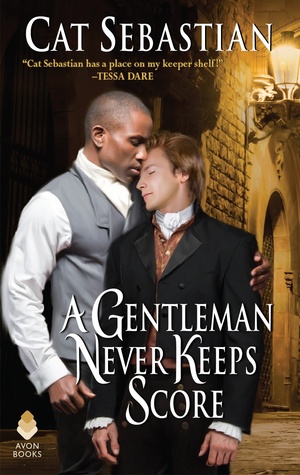 As the second book in the Seducing the Sedgwick series, A Gentleman Never Keeps Score follows Hartley Sedgwick, the preening, prissy brother of Ben Sedgwick from It Takes Two to Tumble. Hartley has gone from social butterfly among the ton to pariah after it comes out through the rumor mill that he received his townhouse after an *cough* arrangement *cough* with his now dead godfather. Retreating into his home, Hartley becomes a glorified recluse looking for a way to get back at his godfather and whoever spread the rumor. His plans get thrown for a loop when he meets Sam. Barkeep and ex-boxer, Sam has created a haven in the Free Black community and does all he can to help his patrons. His brother’s girlfriend comes to him with a unique problem. Someone painted a salacious portrait of her when she was a teen and she wants it back before she marries Sam’s brother. The commissioner of the portrait was none other than Hartley’s godfather.

For anyone who says romance is shallow, I would like to point them to Cat Sebastian’s work (among several others I can name off the top of my head). This story not only grapples with the long-lasting scars of sexual abuse but racism/racial profiling, PTSD, the complexities of consent, and the fluidity/rigidity of class in Regency England. There’s a lot that can be unpacked from this novel, but above all else, it’s a satisfying romance between two lovable characters. All of the issues and topics mentioned above are done with an immense amount of sensitivity and obvious research.

Hartley is a popinjay. A preening dandy who uses his clothing and impeccable manners as a shield against the world. He’s been hurt in the past and has a lot of issues to work through, but it makes him feel human and complex. For as onion-like as Hartley is, Sam comes off as a much more even presence. He began life as boxer, like his father before him, and now makes a living running his pub, The Bell, along with his brother. Life is never easy as a black man in London, but he tries to make life a little easier for his patrons and friends. Sam is a wonderful foil for Hartley as he is a calming force while still maintaining a lively air and a realistic range of emotions. I mention this because it is often the calm characters who come off as cut-outs.

Cat Sebastian has once again created a warm-hearted romance that deals with deeply personal issues while leading readers into the next romance featuring Ben and Hartley’s brother Will and a down on his luck nobleman who seems to be having more issues than he’s letting on. If you like historical romances with prickly yet lovable characters, you need to grab a copy of A Gentleman Never Keeps Score.