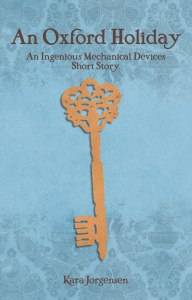 8,000 word companion short story that takes place after the events of The Winter Garden.

After a trying two months at Oxford dealing with miserable classmates and isolation, all Immanuel Winter wants is a peaceful weekend with Adam— two days where they could forget about the impossibilities of their future together.

But when the arrival of a radical female lawyer turns the university upside down, their holiday plans are put in jeopardy.

Will Adam and Immanuel be able to escape the horde of dons descending upon the city or will they be forced to postpone their plans and their future?

“The Errant Earl” is an 8,000 word companion short story to the Ingenious Mechanical devices series that takes place seven years before the events of The Earl of Brass (IMD #1).

Forethought is not a virtue Lord Sorrell possesses. At nineteen, he feels as if his life is beyond his control. He wants nothing more than to get away from his father, his teachers, and especially England, but he may have found a way with a little help from his friend and valet, Patrick.
He has one shot to escape to the East: catch the first Orient Express dirigible out of England when he returns home from university. The only problem is his mother has planned a party.
With a house crawling with guests and his brother scrutinizing his every move, will Lord Sorrell be able to sneak away or will he lose himself to the duties of the earldom once and for all?