June is LGBT+ Pride Month, so I decided to review LGBT+ books for the month. I’m hoping to write 10 reviews this month, so here is number 5: Unfit to Print by K. J. Charles. I received this novella as an ARC, and Unfit to Print will be out July 10th. 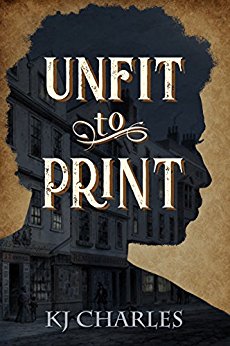 Vikram Pandey’s job as a lawyer crusading to better the lives of Indian immigrants living in London brings a case of a missing youth. The only clues are a photograph of the young man in question and that he has been spending time with gentleman, in a manner of speaking. Going door to door on Holywell Street, Vik runs into his best friend from school, Gil Lawless, who now happens to be the proprietor of an illicit bookshop. Together they search for the lost boy and find they share more than memories.

I am a sucker for grumpy, uptight characters. Perhaps it’s because I feel a kinship with them, being an over-wound person myself. Either way, Vikram is one of my favorite characters thus far in K. J. Charles’ world. He is confident, well-versed in the law, a hard-ass of the highest order, and a soft heart. In the other corner, we have salt of the earth, Gil Lawless, seller and writer of unlawful smut who lives in the moment and lives with (note: I didn’t say owned) a cat named Satan. They go together like grape jelly and chili sauce (don’t look at me like that, it makes good sweet and sour sauce). Their dynamic is fabulous, but in the story, I wish there was a little more of them as a couple outside of the missing person search. Unfit to Print is a novella, so there is only a certain amount of space.

The mystery itself is well-written with enough intrigue and violence to keep you turning the page without being convoluted. One of the most interesting aspects of the story is the Victorian pornography angle. Nothing in the story is described in a way to make it overt erotica, which it isn’t, but it’s an interesting topic in that the Victorians had A LOT of porn floating around for such a seemingly morally uptight society. The story touches upon the various avenues through which the Victorians met their sexual needs and the hypocrisy surrounding the industry as well as how vulnerable people fall victim to it.

In terms of representation, this is a win, especially if you have been following the ridiculous comments romance publishers have made about PoC being main characters. Both characters in Unfit to Print are PoC, and the theme of identity and what it means to be a first-generation immigrant are discussed in the story.

If this review tickles your fancy, you can pre-order Unfit to Print now.