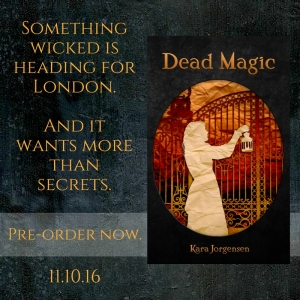 Since Dead Magic will be coming out in a little less than a month, I thought I would share the first few chapters here to whet your appetite for its release on November 10th. Over the next few weeks, I’ll be releasing a few more of the opening chapters. I hope you enjoy!
If you missed it, here are chapter one, chapter two, chapter three, and chapter four.

Adam Fenice paused at the stove, listening as the grandfather clock in the hall struck six. A small grin crossed his lips. Immanuel would be home any minute, and Adam hoped to god he had a good day at work. They had only been living together eight days, but it was beginning to feel as if he had always been there. He had expected it to be harder to integrate their dissonant lives under one roof, especially when he had spent his life fighting to be seen as a separate person from George and Hadley and their businesses. With Hadley married and gone, Adam suddenly found himself alone, staring at gaps in shelves and empty rooms where she had once been. A quiet fell over the house that couldn’t be silenced. Something was missing, something he couldn’t fill alone.
When Immanuel appeared at the train station with only one trunk, Adam feared there would still be an emptiness, but soon science books appeared where ones on mechanics had once been and a sweet, soft voice singing in German chased away the morning silence. Suddenly it was as if he had always been there. No longer did his parents’ marriage bed feel too large or the house too empty for a bachelor. Hadley’s old room was stocked with Immanuel’s somber wardrobe and soon her old workroom would smell like bleaching bones and varnish. What Adam loved most was seeing two dressing gowns hanging in their room and the shallow indent in the pillow where Immanuel’s head had been.
With a groan, the front door opened. Glancing around the doorway, Adam could only catch a glimpse of Immanuel’s blonde hair and the swing of his leather satchel as he pulled it over his head. Adam turned his attention back to the stew and waited. Quiet footsteps padded into the kitchen, and within seconds, Immanuel’s hands were snaked around his stomach and his head was nestled against his shoulder. Adam drew in a long breath, inhaling the familiar soapy scent of Immanuel’s skin. His lips brushed Adam’s neck and cheek before returning to his shoulder.
“Have a good day at work?”
“Better than I expected,” Immanuel purred, giving Adam a squeeze. “I got you invited to the museum’s gala.”
“Oh really? And how did you manage that?”
“I threw your sister and brother-in-law’s names around. Once they realized we were all related and we shared a flat,” he paused as Adam turned toward him with a questioning henna brow, “they wanted to extend an invitation to the Countess’s brother, lest he feel slighted.”
“I’m sure you were put out that you had to invite me. I’m but a lowly money-counter.”
A grin spread across Immanuel’s lips as Adam wrapped his arms around his. “Well, I see you every day, so why would I want to spend an entire night with you drinking champagne and waltzing?”
Adam turned, catching Immanuel’s hands and pulling him closer until their hips were flush and their gazes met. Keeping their joined hands up, he tightened his grip around Immanuel’s back and took the first step of a sweeping waltz. Immanuel stumbled after him, half a beat behind as he was twirled backwards.
“Waltzes aren’t your strong suit anyway,” Adam replied with a toothy grin, his pencil mustache curling in agreement.
“Thankfully, I would rather not be asked to join when I can’t dance with my partner.”
Slowing to a stop, Adam turned, his blue eyes softened with thought. Immanuel’s grip tightened as he pulled him in for a kiss. Adam sighed, his eyes closing at the gentle push of Immanuel’s tongue against his lips. Arching back, he wrapped his arms around the taller man’s neck and his hand sliding into the curls of his hair. A chill washed over him at the skimming of fingertips over his spine. Immanuel’s hand dipped under his jacket and made its way toward the top of his trousers.
“We should wait until after dinner,” Adam whispered, licking his lips and resting his forehead against Immanuel’s.
Adam wanted to say more. He wanted to bang his fist on the table and cry that it wasn’t fair. That none of this was fair. At Hadley’s wedding, he and Immanuel had sat at the same table for hours, watching other couples dance with arms and eyes locked. He caught their knowing smiles when bodies brushed while he and Immanuel had to pretend they barely knew each other. Staring into his glass, he had wished he could take Immanuel by the hand and dance alongside the other couples, but as he tightened his grip on the stem of his glass, a gentle hand squeezed his arm. When he lifted his eyes, he had expected to find Immanuel giving him a reproachful look. Instead, he found Hadley staring down at him, her eyes heavy with guilt. Did she regret inviting them both to the wedding when she saw the misery etched into her brother’s features? That night when they returned to the house on Baker Street, anger had deteriorated into melancholy. Stripped of their finery, they had lain in each other’s arms until daybreak, a tangle of limbs and lips making up for lost time. Would they always be making up for those impossible moments?

If you enjoyed what you read, you can pre-order Dead Magic here and have it delivered to your Kindle on November 10th. Paperbacks will also be available closer to the release date.

Stay tuned for more chapters and previews to come.