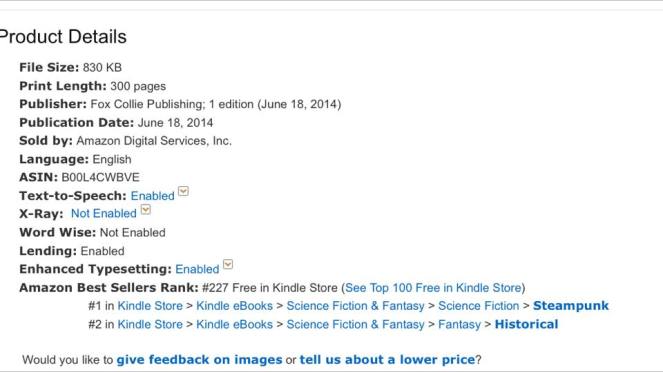 So I decided last week that I would conduct an experiment. The part of me that is a biology major is screaming, “Insufficient data!”, but I would still like to share my meager yet telling findings with you.

People buy more ebooks during the week than they do on the weekend.

On the 19th, I had made The Earl of Brass free for that Saturday only. I did a bit of hustling online, posting about my sale, making my little graphic for it, and tweeting it with tags to various retweet groups. I only sold 122 copies that Saturday. While that’s nothing to scoff at since now 122 more people know of my book, it isn’t that much. I climbed up the sales rankings, tapping out somewhere around #2,000 in the free Kindle store and #3 in free Steampunk. Not bad at all. I saw similar results when my friends/fellow authors posted about how they did with a Saturday sale and no outside promotion.

Then, I started to think about when I buy ebooks. Did I do it often on the weekend? Not really. When I checked my email on a Saturday or Sunday, I would scroll through my Bookbub or Ereader News Today email, only stopping if something really caught my eye. Most people are busy during the weekend. They’re running errands, driving their kids to activities, catching up on some Netflix. They aren’t scrolling through Amazon’s freebies to find the perfect book.

Well, what day would be better? Friday? Definitely not. People are out and about more on Friday than they are on Saturday. Monday? Nope. That’s the day where you’re all wound-up about work, school, the kids, getting to work/school on time, getting everything together. That left the middle of the week, Tuesday to Thursday. Checking my own ordering habits on Amazon confirmed that I did most of my ebook buying in the middle of the week (you know you have a problem when you can use yourself as a place to gather data). Mid-week you have gotten over the rush of Monday and now you’re thinking about how to escape boredom or even planning what you’ll do later in the week.

I decided to set my next freebie for a Tuesday. This time, there wouldn’t be any roof-top screaming about my book being free. I wanted it to all be organic downloads from people who weren’t influenced by my posts. Amazingly, it worked way better than Saturday, seven times better actually. As you can see from the picture at the top of the post, the best overall ranking I saw last night before I crawled into bed was #227 in overall free, #1 in steampunk, #2 in historical-fantasy. I nearly had a heart attack when I saw those rankings. I was sick as a dog yesterday, so seeing those lovely tiny numbers really made my day. This morning, I went and checked my KDP dashboard to see how many downloads I actually had. 902. 902?! I have never ever had that much downloaded on one day.

I’m sure some of you are screaming, “But they were free!” Yes, they were free because free pulls people in for the rest of your series. People are much more willing to take a chance on a nobody like me if the first book is free. Why pay $3.99 if you don’t know whether my book will suck or not? Free means they’ll download it and if they like it, they may move on to book two. Yes, there are people who just hoard free books. I’ve downloaded quite a few free books I haven’t gotten back to, but the thing is, the book is on their device. At any time, they could read it and discover that you’re one of their favorite authors. A loss leader can only help to boost future sales and hopefully generate a few reviews as well.

Right now, I’m working on my plan of attack for when The Earl and the Artificer is finished. Leading up to it, I’m going to be doing a few more freebie days to generate interest in the series. With Kindle Select, I get 5 freebie days to allocate as I wish, so I’m sprinkling them around. I’m not 100% sure when book 3 will be out yet, but when it gets closer to the release date, I hope to take out an ad in Bookbub or ENT about The Earl of Brass being free. Hopefully, that’ll drive sales toward books 2 and three. This plan won’t be implemented for a while, but it never hurts to plan ahead. I will update you as I go on experimenting with sales and marketing.

6 thoughts on “An Experiment”