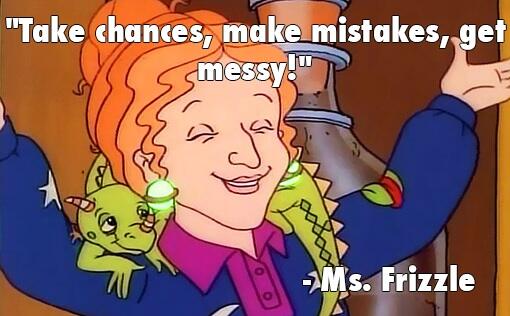 I have found my motto for when I teach college freshmen in the fall and it comes from one of my childhood inspirations, Ms. Frizzle from The Magic School Bus.

One of the points we’re supposed to stress to the freshman is that writing should be done in multiple drafts and not in one giant Red Bull-fueled writing binge the night before it’s due. Why? Why does it matter that they hand in drafts instead of one “complete” paper?

A) That writing binge paper is probably shitty. I mean, have you ever read something you wrote at 2 AM?

B) Freshman need to be broken of bad habits they are taught in high school, like papers that focus on form over originality of thought

C) Drafts are a place to experiment, to find what you really want to say, and work on their craft. If they were playing baseball instead of writing, would you tell them that learning to catch the night before a game was adequate?

What I want my students to understand is that drafts in my class will be place for them to experiment with their writing and evolve. Those drafts will only be graded on their completion, but they’ll still be able to get feedback that will help them. The funny thing is, I found myself stumbling into the same trap as my future students.

I was working on a tough scene in Dead Magic and found that I was staring at my Word doc instead of actually writing. I knew what I wanted to have happen in that scene, but I was scared to write it. Putting it into a Word doc seemed so permanent. What if it was bad? What if it needed major rewrites? Fixing it on my Word doc would be such a hassle.

In my head, I knew it was a draft. I know that this version of Dead Magic is going to be overhauled several times before it ever hits Amazon, yet I still found myself staring at my computer as if it could never be changed. Luckily, I’m a stationary addict and already had a notebook I had hoped to use while at work or school to jot down ideas. Putting the laptop aside, I scribbled out the scene over the course of about two hours. It wasn’t perfect, it wasn’t neat or even that detailed, but it was written.

Step one: Write your stuff in a low-stakes place. Just get it out and try to keep going without too many stops.

Step two: Type it up and edit as you go.

For me, step two is par for the course. I’m not just going to slap up my shitty draft into the Word doc I was so paranoid about ruining. As I type up the new material, I add the detail that was missing in my handwritten draft and clean up any oddities. The low-stakes writing gets you out of the rut and can easily be translated into high-stakes writing. One of the unexpected perks was that I ended up writing more by hand and the word count grew even higher when I added detail while transcribing it.

If you’re getting performance anxiety working on your draft, try a change switching your medium. Writing in a designated notebook instead of Word may help take the edge of your perfectionism and help you get past your “writer’s block.”