It’s June, which means it’s LGBT+ Pride Month. I decided that my June reviews will focus on LGBT+ fiction I’ve read lately. This really isn’t a stretch for me since 75% of what I read has queer characters and was probably written by a queer author.

My first recommendation is a wonderful graphic novel I picked up at Bookcon last Sunday called The Prince and the Dressmaker by Jen Wang. 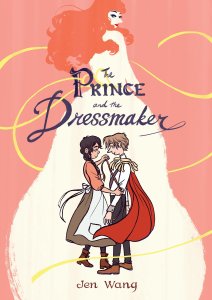 The story centers around Frances, a young dressmaker hoping to one day become an independent designer, and Sebastian, the prince of Belgium who is harboring a secret: he likes to wear dresses. After Frances creates a daring ensemble for a noblewoman’s daughter (much to the chagrin of society), Sebastian sends his valet to hire Frances to be his personal designer. Unfortunately, Sebastian isn’t quite out about his penchant for dresses because he fears his family (and his country’s) disapproval. Instead, he dons his new wardrobe and goes out on the town as Lady Crystallia, who soon turns into a fashion icon.

This book is absolutely adorable. Frances and Sebastian are warm and sweet and fragile. They remind the reader of that time when many of us weren’t sure where we fit into the grand spectrum of life and gender/sexuality. It’s written in such a way that the story and themes are easy enough for middle grade readers to understand without being patronizing or dull for adult readers. Honestly, I gobbled this book up in about two hours and couldn’t put it down even though I should have turned in for the night. This was due to the sensitivity with which this story was written while at the same time crushing the characters with doses of reality.

What really sells the book though is the artwork. Every page is beautifully rendered in detail and full color. The clothing is lush and textured and the backdrops scream of a Moulin Rouge era Paris. The art style is somewhat akin to what’s seen on Steven Universe but more realistic. The story itself is purposely anachronistic yet retains the historical charms of the early twentieth century.

If you like the daring costumes of RuPaul’s Drag Race and Lady Gaga, queer historical-fantasy, and beautifully rendered graphic novels, then The Prince and the Dressmaker is for you.

Grab a copy on Amazon on your way out.