The Dark Descent of Elizabeth Frankenstein by Kiersten White reframes Mary Shelley’s Frankenstein to show Victor for who he truly is. 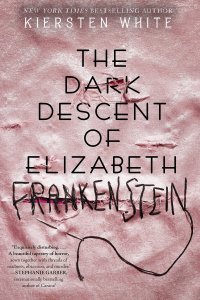 It’s rare that I read a rewrite or retelling that I truly love, but The Dark Descent of Elizabeth Frankenstein (to be called TDDoEF from here out) does an absolutely fabulous job of making sense of the original story and tweaking it for a modern audience. I have been a fan of the original Frankenstein since I first read it in high school, but if you’re someone who cheered for the monster rather than Victor, you’ll enjoy TDDoEF.

The story is told from the perspective of Elizabeth Lavenza, a ward of the Frankenstein family and Victor’s eventual angelic wife in the original tale. The novel artfully stitches together the original story with new material to create a new being more twisted and dark than one could have imagined. It rips Victor from his status of hero and elevates poor Elizabeth to something between an anti-hero to a heroine.

What I especially loved about this work was that White interweaves old with new so well, to the point that I often forgot where the old story left off and new information picked up. Using Shelley’s material, she explains why Elizabeth acted more like a puppet than a real person, why the monster was as eloquent as he was, why he and Victor took off to the north in an unending chase. The tragedies from the original story are worked into the new story, and I think it makes more sense than the original Frankenstein. Things that a modern reader struggle with in the Regency original are smoothed over and made sense of in TDDoEF rather than being ignored or glossed over. The original is revealed to be source material from Victor’s journals, where life has been fictionalized and certain exploits left unsaid.

It is wonderfully modern and takes Shelley’s feminism further. After reading The Dark Descent of Elizabeth Frankenstein, I think Mary Shelley would approve– her mother certainly would have. Besides an extra dose of feminism, it grapples with privilege and how we enable others. It is a fantastic sequel/companion to the original story, and I give Kiersten White kudos for being able to cobble together old and new better than Victor ever could.

Grab a copy of The Dark Descent of Elizabeth Frankenstein here.