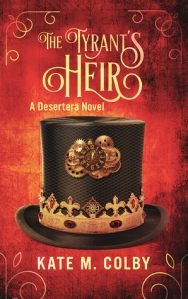 TL;DR:  The Tyrant’s Heir is a nice follow-up to the Desertera where we find Lionel grows a backbone and takes on a saboteur to secure his kingdom.

I received an ARC of this book in exchange for an honest review, but I also bought a copy as I am a fan of Kate’s work and believe in supporting authors I believe in.

The Tyrant’s Heir is the third book in the Desertera series, which takes place in a barren kingdom situated around a beached ship where the hierarchy rules and intrigue lurks down every hall. Lionel Monashe is the new king to the throne but ruling becomes a problem when with every decision, he fears his tyrant father’s old ways and indecision and hesitation becomes the rule of law. When a self-proclaimed prophet disrupts the social and economic order, Lionel finds his moral compass aligns not with the nobles but with the religious zealot. Unfortunately, not everyone in Desertera is thrilled at a change in the old order and some would rather see the kingdom under their control.

In this installment, we see many old faces, including Lord Collingwood, Aya Cogsmith, and of course, Mr. Farmer the prophet. Best of all, we get to see Lionel, not as the flirtatious prince but as a man struggling to be king against the legacy of his treacherous father. Through his struggles, we see a much deeper man than what appears on the surface, who has his own emotional and psychological complexes despite his privileged upbringing.

What I love about Kate M. Colby’s series is how each book links into each other so smoothly with one mystery being solved while flowing into another, and The Tyrant’s Heir leaves us with fantastic mysteries to look forward to in 2018 (why is it so far away?!). As always, the world of Desertera reveals new places to explore and new technology to dissect. My only quibbles with The Tyrant’s Heir are personal and stylistic. At times, I wish there was more description and the writing at the beginning of the novel felt stilted, but this disappears about halfway through. I also wish there was more of the prophet in the second half of the novel after the big spectacle scene.

Overall, The Tyrant’s Heir is a fantastic addition to the Desertera series, and if you want to see more of Aya and Lionel’s budding relationship or if you want to see what the Benevolent Queen has in store for Desertera, check it out and pick it up today.