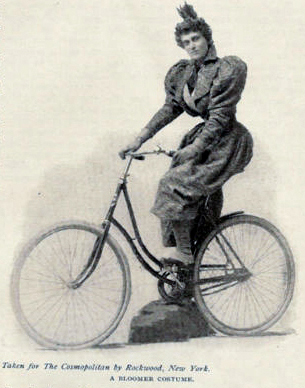 The other night, I introduced my classmates to the Victorian phenomenon of bicycle face. Before I revealed what bicycle face was, my classmates had a few guesses. Was it when you went over the handlebars and faceplant? Or was it getting chapped skin from the breeze blowing in your face? Actually, it is none of the above.  Some doctors in an effort to keep women from riding bicycles began to tote the condition of bicycle face, which caused women to become flushed or pale, their faces strained from fatigue, jaws clenched, and eyes bugging.  But why mention this odd phenomenon if it doesn’t seem to be anything but normal fatigue from physical activity? END_OF_DOCUMENT_TOKEN_TO_BE_REPLACED