During Pride Month, I have decided to review as many LGBT+ books as I can that I have read recently. The book I’ll be talking about today I actually read in May, but because it was the end of the semester and I’m a professor, I forgot to review it. All Out: The No-Longer-Secret Stories of Queer Teens Throughout the Ages was edited by Saundra Mitchell and contains short stories from seventeen queer authors. 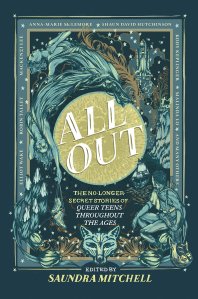 Rather than discuss every story in this anthology, which would take forever and be incredibly boring, I’m just going to talk about a few highlights along with its strengths and weaknesses.

Some of my favorite stories from this anthology are from YA authors I’m already familiar with, including Malinda Lo, Mackenzie Lee, and Anna-Marie McLemore. McLemore’s story, “Roja,” falls in line with her usual tales, magical realism with a Latinx flare. In this case we have a heroine who is a witch trying to save a trans boy, the Wolf, from execution by the government. If you read my review of Blanca & Roja, the stories are completely different despite the similar titles. In “New Year,” Malinda Lo takes us into China Town during Chinese New Year in 1955 where a young woman has her first brush with a lesbian culture and the allure of a forbidden gay club. Mackenzie Lee’s work is always an adorable hoot and “Burnt Umber” is no different. We have gay Dutch painters learning from the masters while trying to master the art of not getting an erection while sketching nude models.

Overall, All Out is a fabulous anthology in terms of sexual/gender diversity and cultural diversity. We have characters from different cultures, races, time periods, etc. There are also characters who are transgender, nonbinary, asexual, bisexual, gay/lesbian, so there is something for nearly everyone. All of the stories were historical fiction due to the theme of the anthology, but the tones of each story are very different, which makes it a fun read.

The downside to an anthology is often the same as the good side: variety. There are some clunkers in All Out as well. “Every Shade of Red” by Elliot Wake was not the most uplifting story, especially when the only transgender character is facing a less than optimistic. The other story that sticks out in my mind as meh is “The Coven” by Kate Scelsa, which features Gertrude Stein but is incredibly dull, especially compared to the other stories in the anthology featuring witches. Often, comparison is what kills some of these stories.

Overall though, All Out would be a great anthology to use in an undergrad LGBT+ literature class, especially since all of the stories are written by queer authors. The sheer variety of sexual and gender identities lends itself to individual discussion of the pieces. Obviously, some stories will be enjoyed or understood more than others, but the tone shifts make this anthology anything but one note.

You can grab a copy of All Out on Amazon.